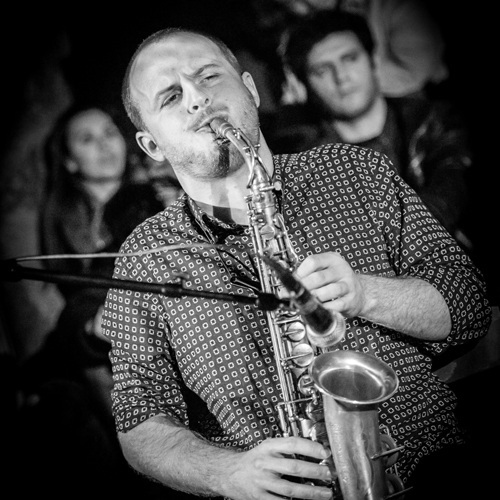 From Northern Greece, Macedonia, Serbia and Turkey as well as further East, Brass Bands have, over centuries, represented an amazing tradition of melodies, dances and improvisations.
The seminar will study these traditions focusing on orchestration and improvisation, as well as learning the specific styles of each region.
The classes will consist of:
All wind instruments are welcome, as well as accordions, percussions etc.
* This lesson will be taught both in Greek and English.
Biography
Fausto Sierakowski was born in 1988 in Paris and grew up in Rome, Italy.

He graduated in classical saxophone from the Santa Cecilia Conservatory (Rome, Italy), under the direction of Alfredo Santoloci in 2009.

In 2012 he obtained a Masters Degree in Contemporary Improvisation from the New England Conservatory (Boston USA), under the direction of Anthony Coleman, Hankus Netsky and Frank Carlberg.

In 2016 he moved to Greece to study Ottoman Classical music with Evgenios Voulgaris.

His current projects include: Fausto Sierakowski Trio (with Panagiotis Kaitatzis, oud, and Stratis Skourkeas, percussions) and People of the Wind (with James Wylie, saxophone and Alexandros Rizopoulos, Percussions).
As an educator, he has taught at the CNSMDP (Paris), Hfm Hanns Eisler (Berlin) as well as given workshops in Greece (Labyrinth, Music Village), Cyprus and Italy.